I recently had to archive large files on a DVD and used Winzip to accomplish this task. As many of my regular readers know, I am obsessed with archiving my digital photos. I have written several posts regarding my experiences with archiving, including my workflow. While I mainly talk about archiving my photos, I also have been archiving my home videos. This is where I encountered a problem.

I archive my data onto Taiyo Yuden DVD+Rs, which can hold up to 4.7 GB of data. The problem with some of my videos, is that I have downloaded an entire DV tape, which produced video files that are 12 GB in size. I have tried to split the video into separate videos (there is more than one on a tape), but haven’t had much luck. I decided to instead just split the file into smaller pieces so it would fit on several DVDs. I’ll explain how I did that in this post.

As mentioned above, I have a few videos that are 12 GB in size, which don’t fit on a DVD. I was lazy in backing up my videos, so I would just fill a tape, and then download the entire thing to a file on my hard drive. The tape holds about 60 minutes, but it comprised of many videos, some only a few minutes long. As a lesson for the future, I’ll try to download each video once it is recorded.

I have tried to separate the individual videos, however, I have only been successful at separating the video portion, and not the audio. I have tried several video packages, but none seemed to do the trick. I can play the entire video with both the video and audio portion without problems, so I know the file contains both. The video format is DV AVI, which may not be support by some video software.

Unable to solve this problem, I decided to take a different approach to archiving the files to DVD. I decided to keep the video as a single 60 minute video, but instead break the file (not the video) into smaller pieces.

As with archiving my data, I had thought about several requirements that will allow me to join the video file back together in the near and long term. Here are some requirements:

Using the above requirements I settled on using Winzip to split my file into several pieces. I chose Winzip, and its zip file format, because it was easy to use, created a widely accepted format, and I was able to specify a custom size. I was also able to compress the video slightly, which makes backing up online quicker, albeit, not too much quicker.

For those who aren’t familiar with the process, I’ll outline the steps below.

Splitting a File in Winzip

I downloaded Winzip 12 from the Winzip web site. It is an evaluation copy, but still has full functionality. After downloading the application, I immediately installed it. Once it was installed, I used the following steps to split my video files. 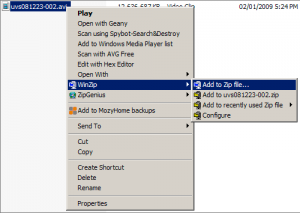 As it creates the files, you will begin to see the zip file, and additional .z01 to .z0n files being created. Each file will not exceed the size you specified, in my case it was 3000 MB (or 3 GB). All files created need to be placed in the same directory in order to unzip the original file. If any of the files are missing, you can’t unzip your original file. Ensure you keep all the files in a safe place and together.

The one benefit that I noticed about doing this is when I backup the files online. Instead of transferring a large 12 GB file, I now transfer smaller files. This means that if I lose my connection part way through the backup, some of the files may have completed the backup so I don’t need to re-upload the entire 12 GB again.

With regards to compression. I did save 700 MB of disk space once the file archive was created, which should save some time on the upload. The biggest advantage, however, is that I am now able to archive the 12 GB video files to several DVDs by using Winzip

I recently had to archive several video files that were 12 GB onto DVDs. Since I had trouble splitting the videos, I decided to split the video files into smaller pieces using Winzip. The process took several minutes to complete, but I finally managed to create several files from each video that can be stored on several DVDs.

What is Your Archiving Workflow?
Is Your Data Safe?
Four Months of Using Mozy