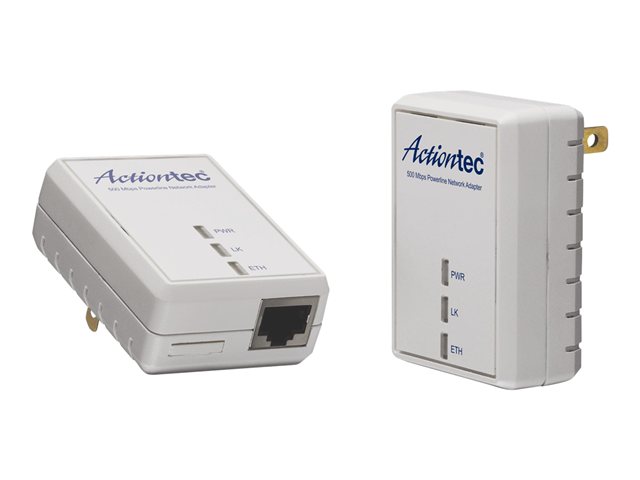 If you are like me and have weak spots in your wireless network coverage, there are a few options that you can try to increase your network coverage. The first is to add repeaters or signal boosters in various locations in your home to increase your wireless coverage. Second, you can run Ethernet cables throughout your house. The third is to use powerline adapters to send network data through your house over your home’s electrical wires.

For me, I chose the third option. To carry out the task I bought a Actiontec Powerline Network Adapter kit that would give network connection to an area of my home that had a weak wireless signal. I have used the powerline adapter kit for the past several months and have tested out the device mostly with streaming content from the Internet. The Actiontec PWR511K01 powerline adapter is compact and won’t take up much outlet and wall space when it is plugged in. There are three indicator lights on the front of the adapter. The lights are labeled PWR (Power), LK (Link), and ETH (Ethernet). You will know when everything is good when all three lights are solid green. If the LK (Link) light is red or orange, you have a poor or medium powerline signal between the adapters.

The Actiontec PWR511K01 network adapter kit includes two powerline adapters as well as two ethernet cables. I didn’t need to buy any extra cables to start using the adapters, which was great. After a few seconds, the lights on the second adapter lit up, indicating that I had established a LAN connection between the two adapters. Once that happened, the laptop was able to connect to the Internet without any issues.

While the PWR511K01 adapter is small and compact, you will want to use it in an area with multiple sockets because you will lose an outlet when the adapter is plugged in. The reason you will lose an outlet is because the adapter does not include a pass-through power socket. In addition, you should plug the PWR511K01 adapter directly into the wall outlet, and not into a surge protector.

The Actiontec PWR511K01 adapter is capable of securing the network connection by encrypting the data that is transferred between the adapters. Why may you want this? If you live in an apartment and you don’t want others to connect to your powerline adapters and thus your network. Of course, because of compatibility issues, you will want to use two Actiontec powerline adapters instead of mixing vendors.

When I read the reviews for this powerline adapter, I noticed that many people were a little disappointed that the description states it is a 500 Mbps adapter. In truth, while it does support Powerline AV+ 500, the LAN ports are 100 Mbps.

Why is it advertised as 500 Mbps? The connection between the adapters is 500 Mbps, but the most you will see with a device is 100 Mbps because of the Ethernet port on the adapter. For me, however, this doesn’t have a drastic effect as I am mostly using the adapter for connecting to the Internet. My Internet speed at the moment is 20 Mbps download, well below the adapter’s speed.

I was worried about the connection performance as one adapter is in the basement at the back of my house, while the second is on the second floor at the front of my house. They couldn’t be farther apart if I tried. On top of that, the adapters are on different circuits.

As I mentioned, I mainly bought the powerline adapters for connecting to the Internet, especially streaming Netflix and other content. My current Internet connection is 20 Mbps download and 10 Mbps upload.

After testing the Internet connection speed, you can see that the powerline adapter provides the full Internet speed to any devices connected to it. This is good as I won’t have to worry about buffering or connection slowdowns while a device is connected to the adapter. The result of the speed test is shown in the image below.

The Actiontec Powerline Network Adapter Kit (PWR511K01) worked really well in my home. There was no performance degradation when connecting to the Internet, even though the adapters were at the opposite ends of my home.

The setup of the adapters took only a few minutes, and the kit came with everything I needed to get up and running without any issues.

While the network speed is advertised as 500 Mbps, the most speed you will get is 100 Mbps, which for some can be too slow if they are looking for a 1 Gbps connection to local resources.

An additional pass-through outlet on the adapter would be nice so the outlet the adapter uses can still be used.

Overall, the Actiontec PWR511K01 adapter is a great solution to those looking to extend the area of their wireless network without adding a repeater or running cables in their home.